-Windows has a scheduler to manage scheduling starvation for other tasks needing a thread to the CPU.
-Premptive schedulnig is highest-priority task first, but lead to thread starvation.
-low-riority threads are “pre-empted” out of the process by higher-priority threads
-Windows uses preemptive
-SQL uses non-premptive scheduling, helps reduce dead-locking of lower priority tasks.
-SQLOS started in SQL 2005, UMS in 2000

– worker list
-runnable list-those tasks that can run now
-waiter list, those tasks waiting on other resources to become available so they can be placed and the runnable list
-runnable-> running -> completed, or moved to a waiter list
-quantum exhausted, go back to runnable, unless there is nothing else waiting.
!! @@SPID = your spid
– a large update can cause blocking
?? does rebuilding a large index on a large table possibly cause blocking while the reindexing happens?

Use this also with sp_who2 or sp_WhoIsActive to see what requests are being executed:

Do this to clear specific DMV data:

– IOPS measures the number of physical transfers that a storage device—such as a hard disk drive (HDD), an SSD, or a SAN—can perform in one second. For example, a device that has 10,000 IOPS can perform 10,000 transfers in one second.
– DiskSpd replaces the older SQLIO for load testing on disks. 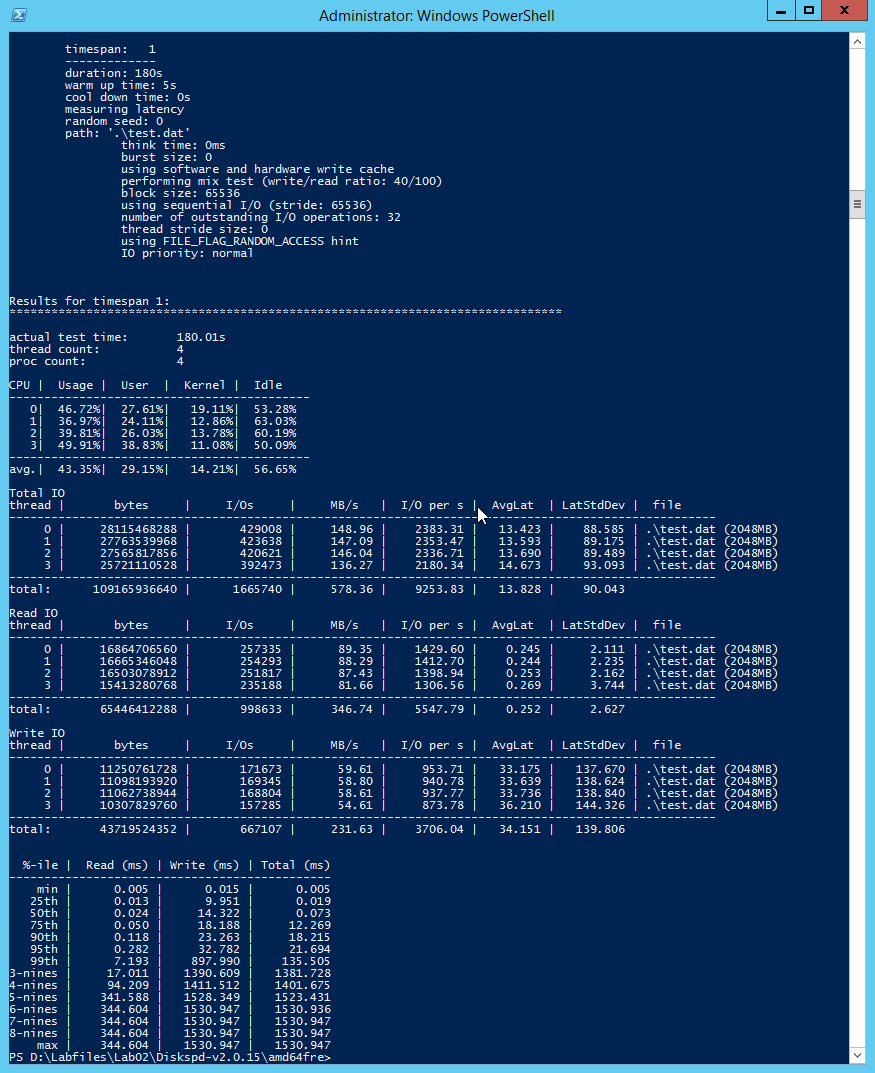 You can establish whether SQL Server is under memory pressure by looking at the metrics:

• Buffer cache hit ratio. The number of pages SQL Server was able to fetch from memory.

• Page life expectancy (PLE). The length of time a page stays in the buffer pool.

• RESOURCE_SEMAPHORE wait. An internal SQL Server worker process executing a query is waiting for a memory request to be granted. This wait occurs when many simultaneous queries exhaust the allocated memory. This will correspond to an increase in the value of the SQLServer:Memory Manger\Memory Grants Pending performance counter.

• Working set trimmed log message. Under external memory pressure, the working set memory of SQL Server is trimmed and paged out to the page file. An error message containing the text “A significant part of SQL Server process memory has been paged out” will be recorded in the SQL Server error log.

Buffer cache hit ratio and page life expectancy can be checked by querying the sys.dm_os_performance_counters DMV.

Natively compiled stored procedures are fully compiled when they are executed giving more efficient execution. You can create them by adding a WITH native_compilation clause to a standard CREATE PROCEDURE Transact-SQL statement.

• Atomic blocks: blocks of code that succeed or are rolled back as a single unit.

• Parameter NOT NULL constraints: constraints on parameters and variables that prevent them being set to NULL.

Lock Manager resolves dead-locks. It runs every 5 seconds unless more dead-locks are detected, then it runs more frequently. You can view dead-locks with sp_who2 and sp_WhoIsActive. • Missing or bad statistics. This results in inaccurate cardinality estimation. The resolution is to create or update the relevant statistics or indexes.

• Functions in predicates. Statistics are not used for queries that join or filter columns using arithmetic or string functions. This can be resolved by precomputing the output of the function, either in a temporary table or a computed column.

Comparing plans in SSMS (very cool! I know how to do this in PE but not in SSMS) 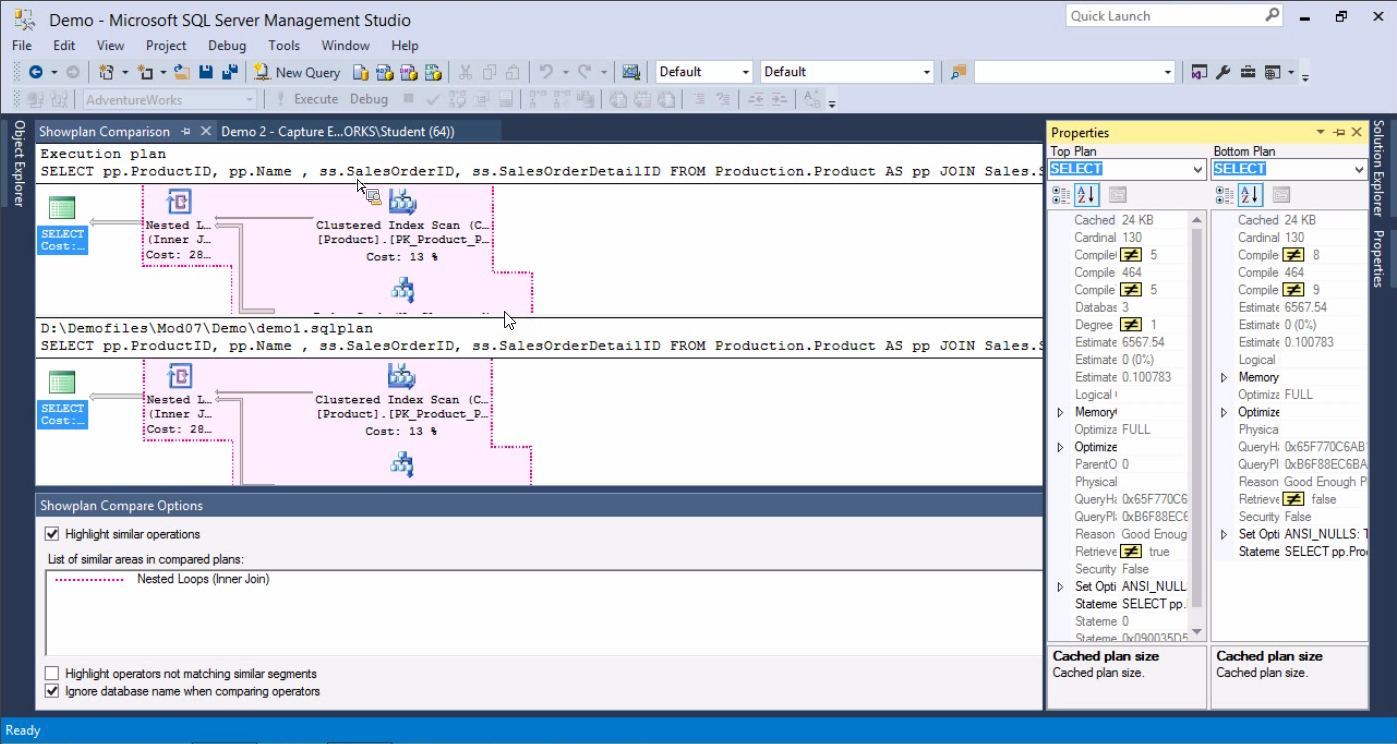 Clear a cached pan (individual) with: 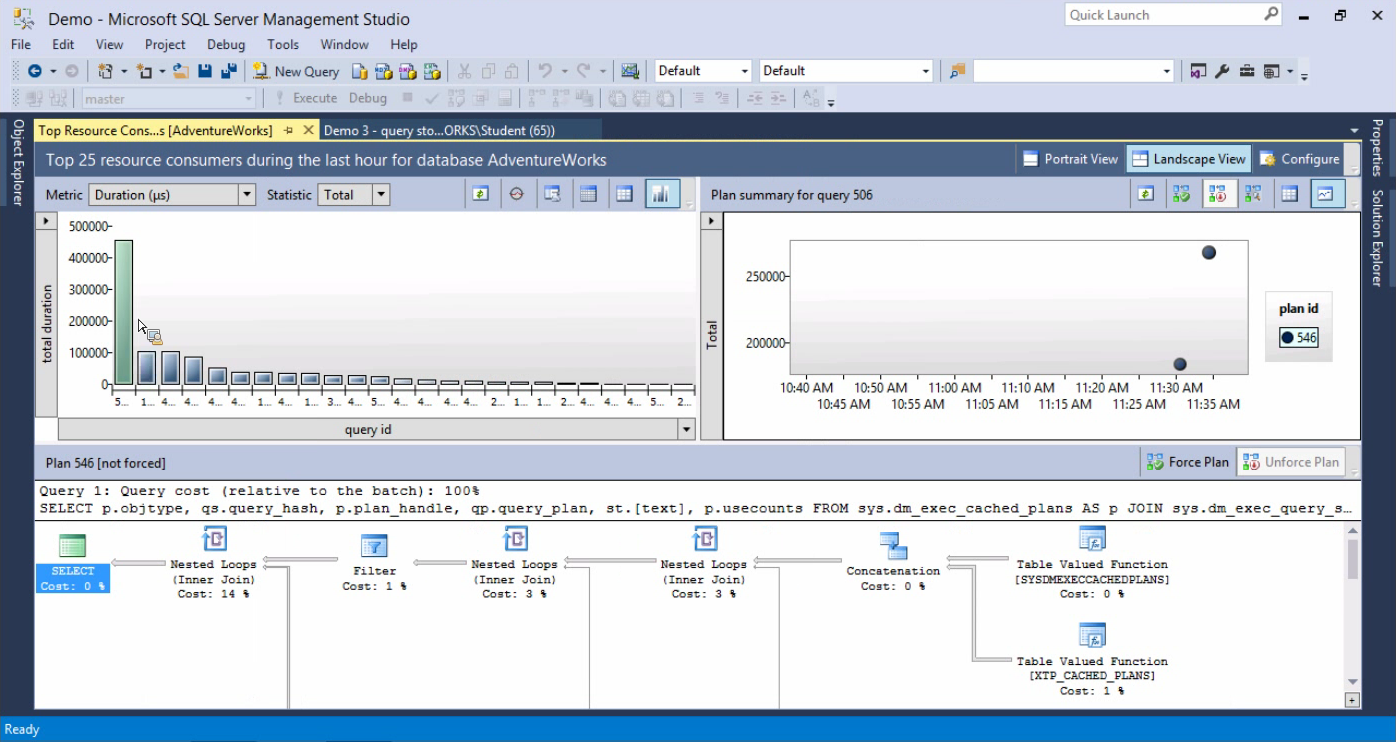 Seeing the live data monitor is where the cool stuff happens for Extended Events. Work through the sample code more and derive a template for our production servers usage.

The following query shows currently running workloads along with their resource consumption:

The following query shows I/O usage for all database files in a SQL Server instance:

!! Look at the baseline scripts and see if we can use some of them.